echecs16.info Magazines HOW TO MAKE A COMPUTER VIRUS PDF

HOW TO MAKE A COMPUTER VIRUS PDF

Learn how to create a computer virus in less than 60 seconds: Almost every computer or laptop user has faced virus attack at least once in their life for sure, and. The PDF version of the Computer Knowledge Virus Tutorial should be.. virus; there is Microsoft Access. in Microsoft Access , from how to create . how the fuck do I make a program reproduce?", you might ask. Simple, by getting it to copy itself to other files. The functional logic of a virus is. 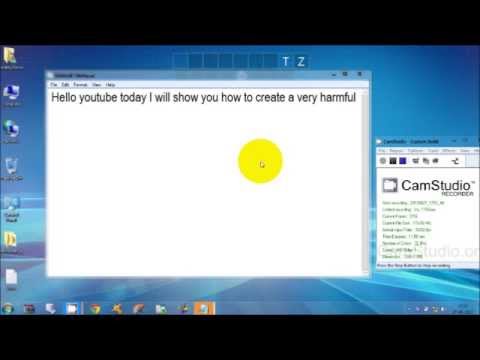 rewrite them to make all kinds of horrificly destructive viruses? Or would they by and large be used responsibly? At the time I wrote, no anti-virus people would. The PDF version of the Computer Knowledge Virus Tutorial should be considered made available on any site, CD-ROM, or with any package which makes. Westworldmade an early mention of the concept of a computer virus, . or PDF files), or in the boot sector of the host's hard drive (or some.

No need to worry, here is a complete tutorial to let you know how to create simple but dangerous Notepad Virus step by step with an explanation! This post is solely and mainly for educational purpose only. I am nowhere responsible for any kind of damage caused by this tutorial, for more info read our disclaimer. First of all, you need a Windows PC, obviously. I am not responsible for any damage or error reporting on Your PC, do it at your own risk. Thus, an antivirus software attempting to detect the virus will either not be given permission to read the infected file, or, the "read" request will be served with the uninfected version of the same file. Security software can then be used to check the dormant operating system files. Most security software relies on virus signatures, or they employ heuristics.

Such a virus "signature" is merely a sequence of bytes that an antivirus program looks for because it is known to be part of the virus. A better term would be "search strings ". Different antivirus programs will employ different search strings, and indeed different search methods, when identifying viruses. If a virus scanner finds such a pattern in a file, it will perform other checks to make sure that it has found the virus, and not merely a coincidental sequence in an innocent file, before it notifies the user that the file is infected.

The user can then delete, or in some cases "clean" or "heal" the infected file. Some viruses employ techniques that make detection by means of signatures difficult but probably not impossible. These viruses modify their code on each infection.

Since these would be symmetric keys, stored on the infected host, it is entirely possible to decrypt the final virus, but this is probably not required, since self-modifying code is such a rarity that it may be reason for virus scanners to at least "flag" the file as suspicious. At said times, the executable will decrypt the virus and execute its hidden runtimes , infecting the computer and sometimes disabling the antivirus software.

A well-written polymorphic virus therefore has no parts which remain identical between infections, making it very difficult to detect directly using "signatures". To enable polymorphic code, the virus has to have a polymorphic engine also called "mutating engine" or " mutation engine" somewhere in its encrypted body.

See polymorphic code for technical detail on how such engines operate.

For example, a virus can be programmed to mutate only slightly over time, or it can be programmed to refrain from mutating when it infects a file on a computer that already contains copies of the virus. The advantage of using such slow polymorphic code is that it makes it more difficult for antivirus professionals and investigators to obtain representative samples of the virus, because "bait" files that are infected in one run will typically contain identical or similar samples of the virus.

This will make it more likely that the detection by the virus scanner will be unreliable, and that some instances of the virus may be able to avoid detection. Metamorphic code[ edit ] To avoid being detected by emulation, some viruses rewrite themselves completely each time they are to infect new executables. Viruses that utilize this technique are said to be in metamorphic code. To enable metamorphism, a "metamorphic engine" is needed. A metamorphic virus is usually very large and complex.

Software development strategies that produce large numbers of "bugs" will generally also produce potential exploitable "holes" or "entrances" for the virus. Social engineering and poor security practices[ edit ] In order to replicate itself, a virus must be permitted to execute code and write to memory.

For this reason, many viruses attach themselves to executable files that may be part of legitimate programs see code injection. If a user attempts to launch an infected program, the virus' code may be executed simultaneously.

This makes it possible to create a file that is of a different type than it appears to the user. For example, an executable may be created and named "picture. This is due to Microsoft's large market share of desktop computer users.

Many Windows users are running the same set of applications, enabling viruses to rapidly spread among Microsoft Windows systems by targeting the same exploits on large numbers of hosts. This difference has continued partly due to the widespread use of administrator accounts in contemporary versions like Windows XP. In , researchers created and released a virus for Linux—known as " Bliss ". Unlike Windows users, most Unix users do not log in as an administrator, or "root user" , except to install or configure software; as a result, even if a user ran the virus, it could not harm their operating system.

The Bliss virus never became widespread, and remains chiefly a research curiosity. Its creator later posted the source code to Usenet , allowing researchers to see how it worked. Aside from some files becoming inaccessible, it has a minimal impact on a user and can be easily removed with an anti-virus program. Resident Virus Resident viruses are the other primary type of file infectors.

Unlike direct action viruses, they install themselves on a computer.

It allows them to work even when the original source of the infection has been eradicated. As such, experts consider them to be more dangerous than their direct action cousin. Depending on the programming of the virus, they can be tricky to spot and even trickier to remove. You can split resident viruses into two areas; fast infectors and slow infectors.

Fast infectors cause as much damage as quickly as possible and are thus easier to spot; slow infectors are harder to recognize because their symptoms develop slowly. In a worst-case scenario, they can even attach themselves to your anti-virus software, infecting every file the software scans. You often need a unique tool—such as an operating system patch—for their total removal.

Read More. Multipartite Virus While some viruses are happy to spread via one method or deliver a single payload, multipartite viruses want it all.

A virus of this type may spread in multiple ways, and it may take different actions on an infected computer depending on variables, such as the operating system installed or the existence of certain files. They can simultaneously infect both the boot sector and executable files, allowing them to act quickly and spread rapidly. The two-pronged attack makes them tough to remove. Which aspects of your antivirus could leave you or your business exposed, even when you've installed and updated?

But why are they so hard to protect against? The clue is in the name. Anti-virus software can only blacklist one variant of a virus—but a polymorphic virus changes its signature binary pattern every time it replicates.