But after all, it's the leaders of the country who determine the policy, and it's always a simple matter to drag the people along whether it's a democracy, a fascist dictatorship, or a parliament, or a communist dictatorship. Voice or no voice, the people can always be brought to the bidding of the leaders. That is easy. All you have to do is tell them they are being attacked, and denounce the pacifists for lack of patriotism, and exposing the country to greater danger. In this case the sentiment expressed is even more disturbing because it comes not from a venerated figure of antiquity, but supposedly from a reviled twentieth-century figure associated with the most chilling example of genocide in human history: Hermann Goering, Nazi Reichsmarshall and Luftwaffe-Chief. We may be made somewhat uneasy by the idea that the head of a classic civilization recognized 2, years ago that the populace could be manipulated into sacrificing themselves in wars at the whims of their leaders, but we're outraged and maybe even scared at the thought of a fat Nazi fascist flunky's recognizing and telling us the same thing. The notable difference here is that although the Caesar quote is a latter-day fabrication, the words attributed to Hermann Goering are real.

The Nuremberg Diary: A front row seat to evil

Forgot password? Nevertheless, traditional business models are no longer sustainable and high-quality publications, like ours, are being forced to look for new ways to keep going. Unlike many other news organizations, we have not put up a paywall. We want to keep our journalism open and accessible and be able to keep providing you with news and analysis from the frontlines of Israel, the Middle East and the Jewish World.

As one of our loyal readers, we ask you to be our partner. Ten of the men were executed, and Hermann Goering committed suicide shortly before he was to be hanged. A vast body of literature exists about the trial, and also about the 12 follow-up trials that US occupation authorities conducted in Nuremberg against lower-level perpetrators of such grotesque crimes as lethal human experimentation.

The record of what transpired in Courtroom at the first trial is widely available. Indeed, most of the trial was filmed and can now be viewed online, with the audio of the English-language simultaneous interpretation intact.

Simultaneous interpretation made its world debut there as well.

However, many of the most dramatic and important developments occurred outside the courtroom, especially during the interrogations of the perpetrators. Those confrontations remain little known, in part because journalists were not present and no audio or film recordings were made. I had a front-row seat, so to speak, as such monstrous evildoers as Goering, the perverted anti- Semitic propagandist Julius Streicher, former Auschwitz-Birkenau death camp commandant Rudolf Hoess, and Otto Ohlendorf, a senior commander of one of the notorious Einsatzgruppen mobile killing units, were confronted during their interrogations with incriminating evidence, often in the form of captured wartime documents that they themselves had signed.

Most of the men eventually admitted to us the basic facts of their involvement in the Nazi machinery of annihilation and despoliation. In the diary I wrote at Nuremberg, and in a letter to my aunt in New York, I recorded some of the more horrifying and significant statements of the men we questioned, along with my personal reactions and observations.

Sometimes I quoted the prisoners verbatim in the original German. From time to time, I return to my Nuremberg notebook. Whenever I do so, memories that have scarcely faded despite the passage of seven decades are vividly, often painfully, revived.

I HAD seen much horror prior to arriving at Nuremberg, during combat from the time I landed with the th Infantry Division at Normandy a week after the bloody initial June 6, invasion until fighting ended in Europe in May , and especially when my unit liberated the nightmarish Nordhausen concentration camp on April 12, Yet the contents of my Nuremberg diary still shock and even haunt me.

The stenographic transcripts of the interrogations have survived, to be sure, and confessions that we obtained can be heard being quoted when they were offered in evidence at the trial. But the typed transcripts cannot possibly convey the full, terrible reality of what it was like to participate in these proceedings.

I was one of some 30 language specialists employed by the US prosecution team. Most of us were recently discharged soldiers or officers who had served in military intelligence and who were now civilian employees of the War Department. We were given captured German documents to translate into English and some of us were also assigned to interpret at interrogations and in court during the trial. 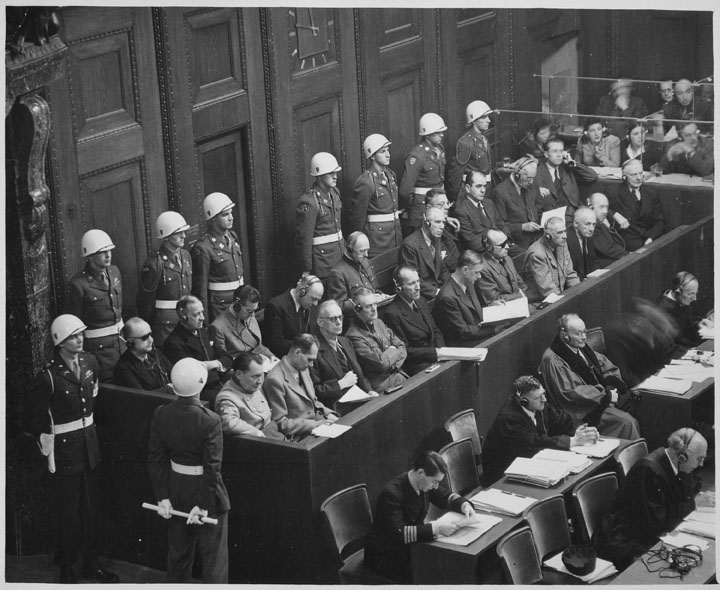 The individuals interrogated included both defendants and witnesses. The questioning was usually conducted by a prosecutor, who was typically an attorney who was also a military officer.

The interpreter had to be fully multilingual and also possess knowledge of the organization of the German state and military, the Nazi Party, the SS and the Gestapo.

Also present was a court reporter, who utilized a stenotype machine to prepare complete transcripts in English. Each transcript was checked for accuracy by the interrogator, the interpreter, and the defendant or witness, who was then directed to sign it. Security was provided by two white-helmeted military policemen bearing side arms.