In the first weeks of life, when the lesions may appear less reticulated, CMTC may look very similar to a capillary malformation. The skin lesions show a marked improvement over time, with the greatest improvement occurring during the first and second years of life.

The pathogenesis of CMTC is unknown. A number of hypotheses have been proposed. These include environmental factors, autosomal dominant inheritance with low or variable penetrance, a multifactorial cause, or a lethal gene surviving by mosaicism.

Histopathologic examination of biopsy specimens may show an increase in the number and the size of capillaries and veins but is usually not necessary to confirm the diagnosis. Most of the congenitally associated anomalies are minor and sometimes questionable. These are not always regarded as associated anomalies, but are included in the specific skin findings in CMTC. The diagnosis of CMTC had been clinically established in all cases.

In 2 cases, the skin lesions initially appeared less reticulated and evolved into the typical CMTC lesions in the first few weeks of life. A skin biopsy specimen was obtained in only 1 case but showed no abnormalities. We examined the extent and the distribution of the CMTC lesions, the associated anomalies, the features, and the observations that were recorded during the follow-up. 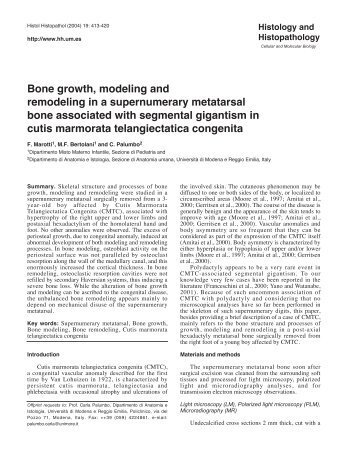 Results The group of 35 children consisted of 13 boys and 22 girls. The age at the first visit ranged from 1 day to 8 years. Twenty-two children were seen before the age of 6 months; 5 children were seen between the ages of 6 months and 1 year; and 8 children were seen after the age of 1 year. All the cases were sporadic, with 1 possible exception. One patient with multiple congenital abnormalities and psychomotor retardation had a mother with some of the same congenital abnormalities and a sister with slow motor development, abnormal hair, and possible mild cutis marmorata.

Two other patients were each dizygotic twins, but in both cases the other twin had no signs of CMTC or any other vascular skin lesion. Figure 1 shows the extent of the observed skin lesions. However, in no patient were the lesions completely generalized. The distribution of the lesions did not seem to follow any particular pattern Figure 2 , Figure 3 , Figure 4 , through Figure 5.

However, in 3 cases, the lesions were sharply demarcated at the midline of the trunk. The associated anomalies that were observed in the patients are listed below: Although cutaneous atrophy is listed above, it may be included in the skin manifestations of CMTC rather than as an associated anomaly.

All cases showed vascular lesions overlying the body asymmetry. The lesions of CMTC were observed in 14 children, including 1 child with an almost generalized distribution. A capillary malformation was present in 1 girl, overlying a hyperplasia in width of her left leg.

However, hypertrophy of the limb may also be seen. Limb girth and length measurements should be monitored on follow up. Prognosis is overall good with greater than half of the patients experiencing improvement of skin lesions. Several anomalies associated with CMTC have been reported, varying between Skeletal defects that have seen include syndactyly, hip dysplasia, clubfoot, cleft palate, micrognathia, triangular face, scaphoid scapulae, dystrophic teeth, high-arched palate, short stature, and tendinitis stenosans.

References 1. Cutis marmorata telangiectatica congenita: a prospective study of 27 cases and review of the literature with proposal of diagnostic criteria.